Here we are 4.5 finally! Taken quite a while, but there's a lot going on behind the scenes. Our intention was to release this update with the BIG changes ahead, however we decided to get this beast in the wild so we can concentrate on the future of SNDH.

Ok a few notes about this release which entered my head:

Stefan Lindberg hinted that my SNDH for Zone Warrior did not sound the same as in the game (I remember years ago that my Utopia rip never sounded 100% but never really investigated why. First the game contained an extra 10 tunes, which are now added. But more importantly my SNDH did not play the tunes as they sounded within the game. This was because I assumed the music driver was only called once every 50th of a second (VBL). On closer inspection I noticed there was also some music code within the game's Timer B raster code and two routines were called for the play routine and not one. Fear not, the SNDH now sounds the same as the game. A knock on effect from this is that some other Barry Leitch musics also feature this driver - hence updates of Utopia, Viking Child, Raiden, Impossamole, Pegasus and Super Cars 2 and  Harlequin which all sound much better :) Just as I was about to release 4.5 I was pointed in the direction of a Youtube interview with Barry in the interview Bazza divulged that he also composed the music to the ground breaking ST busting Postman Pat .... so that makes it way into the archive too!

I've had a semi finished rip of Richard Joseph's Moonshine Racer on my hard drive for years. The reason for this is the 'faffy' way the game plays the intro music. Rather than having one tune it calls multiple sub tunes which are embedded into the game's code. Anyway I finally added my own timer routine into the game which measured exactly when each sub tune was called.... so now you can hear the tune as it sounds in the game :) As usual I checked Atarimania for any un-ripped Joseph tunes, therefore I've also done Dragon's Breath and Demoniak.

Seems sub tune 9 of X-Out was buggy, all fixed now.

Stefan once again came up with some obscure unknown information relating to the Gremlin game Federation of Free Traders. We are all aware of the famous title music for this came which was the opening piece for my UMD 8730 intro. However I didn't know the game featured another 18 sub-tunes which could be loaded from a separate music disk. Needless to say they are now included! 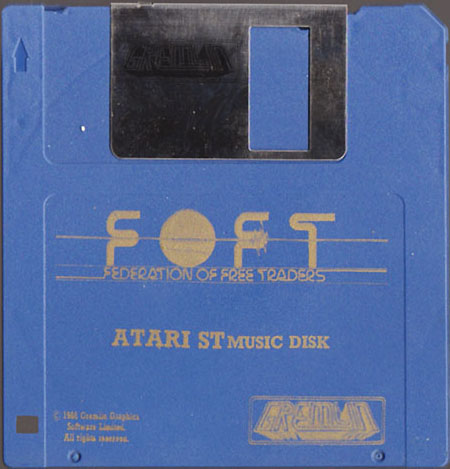 Dave Lowe or not Dave Lowe, that is the question

I've recently backed Dave Lowe's successful Kickstarter project which will be updating his old tunes onto CD (including a full orchestral version of Frontier - Elite 2!). Anyway I mentioned on his site about updating Venus The Flytrap. Surprisingly he responded to say that it wasn't one of his tunes! After further investigating I found the 68000 music driver code is identical to my new SNDH of BSS Jane Seymour. I'm therefore pretty confident that both tunes are by Jason Sheppard. But it doesn't stop there! I'd never SNDH'd many of Dave's digi tracks - so you now have Carrier Command, Starglider 2 and the funky After Burner which features his sample sequencer. Oh and more of his sound chip stuff too: Raffles, Betrayal and The Games: Summer Edition.

A bit of self promotion next. Over the summer I released a little MSA imager called Trans D-Bug Express the program gives the best success rate for imaging old disks (far higher than MSA 1.4, MSA 2.3 or Fcopy DIM format). This was a team effort with additional code by GGN, lush GFX by Ukko and Kraftwerk music by gwEm. In the archive you will find music from TDE both in its release form and gwEm original which features additional samples!

Warp Preview -  as usual we like to include exclusives. This time an ancient Mad Max preview version of Warp using his old music driver. This also includes a sub tune unused in the final release version!

It's not just old stuff, we've got many party releases and tunes by new composers like Shinobi (particularly dig your Dropzone tune!)

Finally I've ripped / SNDH'd some tunes which were in my "can't be arsed / too difficult" folder.... firstly there's Sapiens most of you will recognised both sub tunes as Chrispy Noodle  of the BBC did chip covers of both of these. Quite an advanced digi synth for the time Mr Soulet.

Give Eve the apple!

The other major format I've done for this release is Sierra's AGI & SCI interpreter, so now you can hear all the unmistakable Al Lowe tunes from Leisure Suit Larry, King's Quest, Space Quest and cutting edge games like Donald Ducks Playtime! thanks to Don Adan for some of the data files from the Amiga versions.